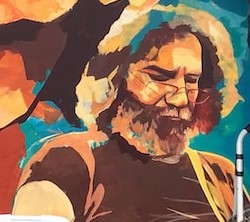 On August 9, 1995 Jerry Garcia, the legendary guitarist and cultural icon who fronted the Grateful Dead, died at the age of 53.  I was about to start my senior year at Mississippi State University and had made the decision at the beginning of the summer to end my baseball career. After a meeting with another icon, Coach Ron Polk.  I told him I was going to focus my attention on getting accepted into law school.  As a walk-on for the Bulldogs, I frankly did not foresee a future which included much playing time.  He affirmed my belief during our conversation.  These days, a player may decide to transfer if they have eligibility remaining, but I had already left Mississippi College after my freshman year to attend State, and there was no such thing as a transfer portal during my playing days.  I reasoned I could try to make the squad again, but while being on the team was fun and I made lifelong friends with whom I played ball, the benefit of simply having a uniform and going to practice did not outweigh the burden of the commitment required to be a college baseball player, even an average one.

Coach Polk held open tryouts in the early 90’s, and each year over 100 players would attempt to make the 40-man roster during fall practice. Early in the morning on Fridays, Polk would personally post the names of the players who would advance to the next week of intersquad competition on a bulletin board located near the elevator on the first floor of the athletic dorm.  He created the list with an ancient typewriter –the names in all caps.  The players on the bubble would scan the words to make sure their name appeared.  If your name was missing, you were cut.  While my name always appeared on the list, I felt like I was always on the bubble.  In fact, I knew lots of great players who had been cut or did not make the team at Mississippi State.  I thought it would be better to quit on my own terms than to scan the list early one Friday to see “Robertson” was nowhere to be found, enduring the associated awkward silence from my friends on the team and the end of something I had done most of my life –sort of like a divorce.  The fear of rejection greatly outweighed my desire to focus on law school, so I detached myself from the game and turned my attention to the future.  As it turns out, my teammates played in back-to-back College World Series in 1997 and 1998, but I never watched a single game.  I felt rejected by baseball, so I rejected it back.

In the mid-90’s I had eclectic musical taste.  I guess I still do.  I first learned to appreciate music at Oak Forest Baptist Church.  We did not have much of a youth program at the church, but we did have a youth choir.  We would practice on Sunday nights.  Although I did not have the ability to play an instrument or sing to an audience alone, I learned to appreciate people who did.  While I was not a huge Grateful Dead fan, and I never saw them live, after my baseball career was over, I did have time to see the shows of jam bands like Phish, the Dave Mathews Band and Widespread Panic.  Like many of my peers, this music created the soundtrack for my college experience.  I did, however, appreciate the significance of the passing of Jerry Garcia.  I even framed the September 1995 edition of Rolling Stone Magazine which featured the Grateful Dead vocalist on the cover.  I had it in my office for years.  The cover depicted a closeup of Garcia in black and white with black wire rimmed sunglasses slid down the singer’s nose.  His full beard displaying a Touch of Grey, which is also the name of one of the Dead’s most iconic tracks.

Dawn is breaking everywhere
Light a candle, curse the glare
Draw the curtains, I don’t care
‘Cause it’s alright

I see you got your list out
Say your piece and get out
Yes, I get the gist of it
But it’s alright

Oh, well, a touch of grey
Kind of suits you anyway
That was all I had to say, and
It’s alright

Excerpts from Touch of Grey by the Grateful Dead (1987)

I have found life is filled with more touches of grey than black and white.  This is especially true in our relationships.  Even the word “grey” has two acceptable spellings.  Sometimes I think I made a mistake leaving Mississippi College for State.  I played a good bit as a freshman at MC, and the team was filled with great guys who have gone on to be quite successful in their lives.  I simply was not good enough or dedicated enough to earn enough playing time at State to make the many sacrifices worth it.  However, had I not attended State, I may not have enjoyed some of my richest friendships that have spanned decades.  One of those guys opined in our “Old Diamond Dogs” group text that it was my career plan all along to pursue baseball, meet a bunch of dumb jocks who are bad at relationships and cash in by representing them in their divorces.  I guess he was not totally wrong.  But to me, it was an opportunity to walk with people with whom I had shared youthful life experiences during one of the darkest seasons of their lives –an honor to connect on a deep level and be a helper to someone I cared about who was hurting.

Jerry Garcia has been gone twenty-seven years today, which is also how long it has been since I put on a baseball uniform. I reconciled with baseball. I even recently paid thirty bucks for the MLB channel during its trade deadline sale.  I try to attend a game if I am ever in a city with a team during the season.  My youngest daughter and I took a short odyssey last summer to visit three parks and see four games in five days.  I snagged a foul ball in St. Louis.  A great ballpark, especially the old ones like Wrigley and Fenway, are as exciting to me as some of the world’s greatest cathedrals.  I truly appreciate, now more than ever, the amazing talent of the top performers in the professional game, and I am deeply proud of Mississippi’s back-to-back National Championships.  I watched every out.

So maybe the next time shame rises in your deepest thoughts about a past decision, and you experience regret about a choice you made, you can remember the words of our friend Jerry and see the blending of black and white, right and wrong and yes or no.  In truth, a touch of grey suits us all in a way, and it’s alright.

Craig Robertson is the founder of Robertson + Easterling. For over 20 years, he has practiced exclusively high net worth divorce and complicated family law in Mississippi. Over the course of his career, he has worked with several professional athletes and their families. You will want him in your corner because he believes every case is his most important, and he knows the things you care about deeply are at stake –family, safety, and security. He is strategic, collaborative, creative and a proud former walk-on at Mississippi State University.